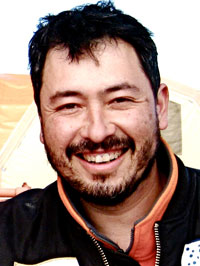 Dr. Pascal Lee is a Planetary Scientist at the SETI Institute. He is Co-Founder and Chairman of the Mars Institute, and Director of the Haughton-Mars Project (HMP) at NASA Ames Research Center. He holds an ME in Geology and Geophysics from the University of Paris, and a PhD in Astronomy and Space Sciences from Cornell University.

Pascal Lee’s research focuses on asteroids, impact craters, and Mars, in particular the history of water on Mars. Based on his fieldwork in Earth’s polar regions, Lee was first to propose the Cold Early Mars model which suggests, counter to conventional wisdom, that Mars was climatically cold throughout its history, rather than ever “warm and wet”.

Pascal Lee has worked extensively in the Arctic and Antarctica viewed as “analogs” for Mars. In 1988, he wintered over in Antarctica as Chief Geophysicist at Dumont d’Urville Station, Adelie Land. He participated in five additional summer field campaigns in Antarctica with the U.S., French, and Chilean polar programs, including three as a member of the United States Antarctic Search for Meteorites (ANSMET) project. He is a recipient of the United States Antarctic Service Medal.

In 1997, Pascal Lee initiated the Haughton-Mars Project (HMP), an international multidisciplinary field research project focused on planetary science and human exploration studies at the Haughton meteorite impact crater site on Devon Island, High Arctic. He established the Haughton-Mars Project Research Station (HMPRS), now the largest privately operated polar research station in the world. To date, Lee has led 18 summer and 5 winter field campaigns in the Arctic, including the recent Northwest Passage Drive Expedition in 2009-2011 during which he and five other team members drove a Humvee serving as a pressurized rover simulator over a record-setting distance of 500 km on sea-ice along the fabled Northwest Passage.

Pascal Lee is internationally recognized for his efforts to advance the human exploration of Mars, in particular via its moons Phobos and Deimos. He has led, or participated in, the development of several new mission concepts to explore Mars and its moons, of new spacesuit technologies for Moon and Mars exploration, and of pressurized vehicles for future human planetary exploration. Lee was scientist-pilot of the first field test of NASA’s Small Pressurized Rover (SPR), a.k.a. the Space Exploration Vehicle (SEV). Lee also led the first field investigations of the use of robotic arm systems in support of human explorers operating future pressurized vehicles on asteroids, the Moon, and Mars.

Pascal Lee is the author and co-author of over 100 scientific publications and the recipient of research grants from NASA, the National Research Council, the Canadian Space Agency, and the National Geographic Society’s Committee for Research & Exploration. He is as an advisor to NASA.

Pascal Lee is the author of a non-fiction children’s book titled MISSION: MARS, published by Scholastic. The American Association for the Advancement of Science (AAAS) awarded MISSION: MARS the 2015 AAAS/Subaru Prize for Excellence in Children’s Science Book in the Middle Grades Category.

Pascal Lee enjoys flying and painting (but not at the same time). He is an FAA-certified helicopter commercial pilot and flight instructor, and an artist member of the International Association of Astronomical Artists (IAAA).